Jazz From Its Birth to George Gershwin&#039;s Rhapsody in Blue and Beyond 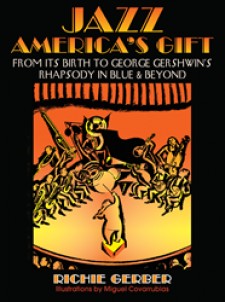 In Jazz: America's Gift, Gerber draws from his unique perspective as an accomplished musician, comedian, impresario, and George Gershwin scholar. Kirkus Reviews writes, "[Gerber] makes a strong, enthusiastic case for Gershwin's contributions to jazz, something that many jazz historians, according to the author, don't often acknowledge ("As far as George Gershwin goes—jazz can't live with him and jazz can't live without him!")."

Kirkus Reviews adds "Gerber paints a vivid picture of jazz's roots in slaves' spirituals and minstrel shows; the music's popularity in the Storyville section of New Orleans; and the emergence of Louis Armstrong."
Gerber's book is a reminder of the harmony that emerges from the jazz art-form that transcends racial and religious differences. As Kirkus Reviews further states, "[Gerber] unearths some interesting facts, such as shared cultural experiences of African-Americans and Jews: he notes that African-American singers such as Billie Holiday and Alberta Hunter recorded Jewish songs, and that Louis Armstrong so admired Jewish people that he wore a Star of David around his neck."

Publisher's Weekly issued a complimentary review of Jazz: America's Gift on BookLife, saying, "Gerber's deft, energetic examination of Gershwin's music . . . illuminates the enormous Jewish contribution to the great American musical export, jazz," and "[Gerber] scores points with his bold commentary about the complicated political and cultural relationships between Jewish and black communities with regard to jazz." The Publishers Weekly review continues, "Gerber… links the raw power of jazz and the blues to the country's past of prejudice and racism," and "Gerber does well with the life of musical genius George Gershwin."

Get notified about new releases.

Sign up for email updates from Gerber's Miracle Publishers LLC .